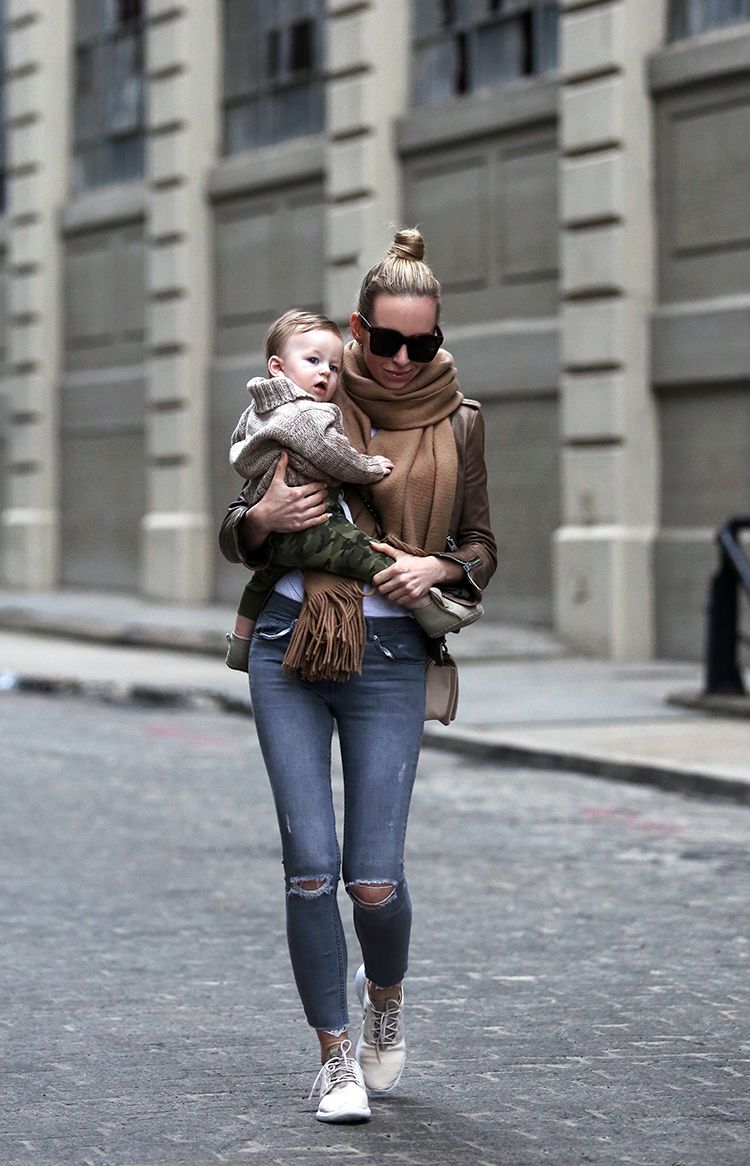 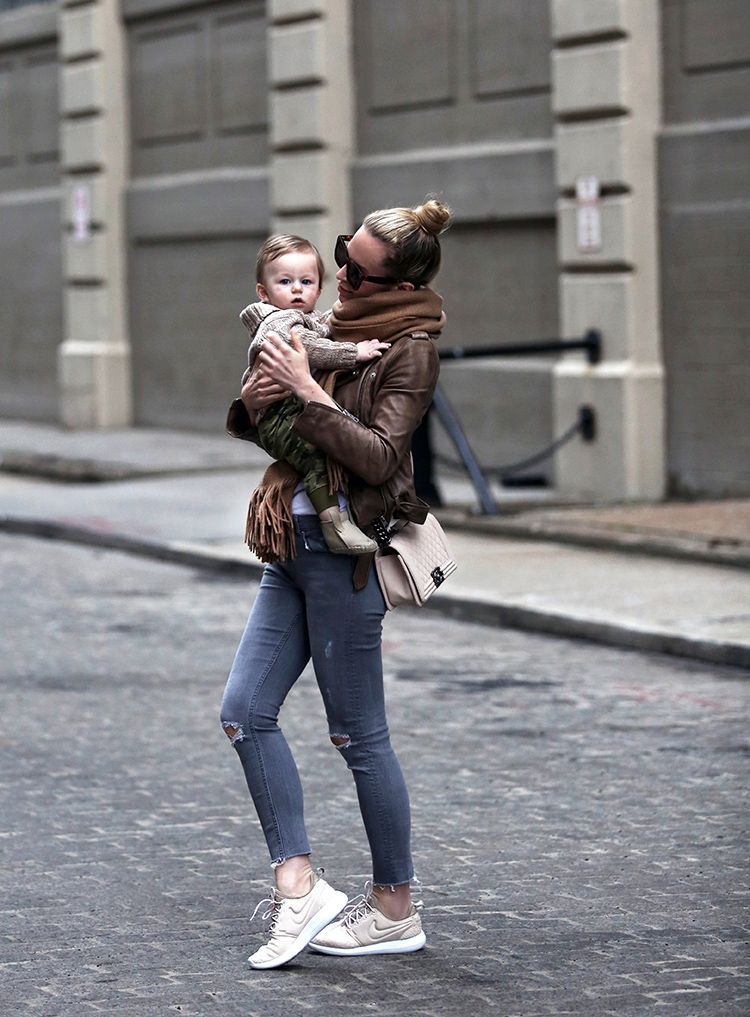 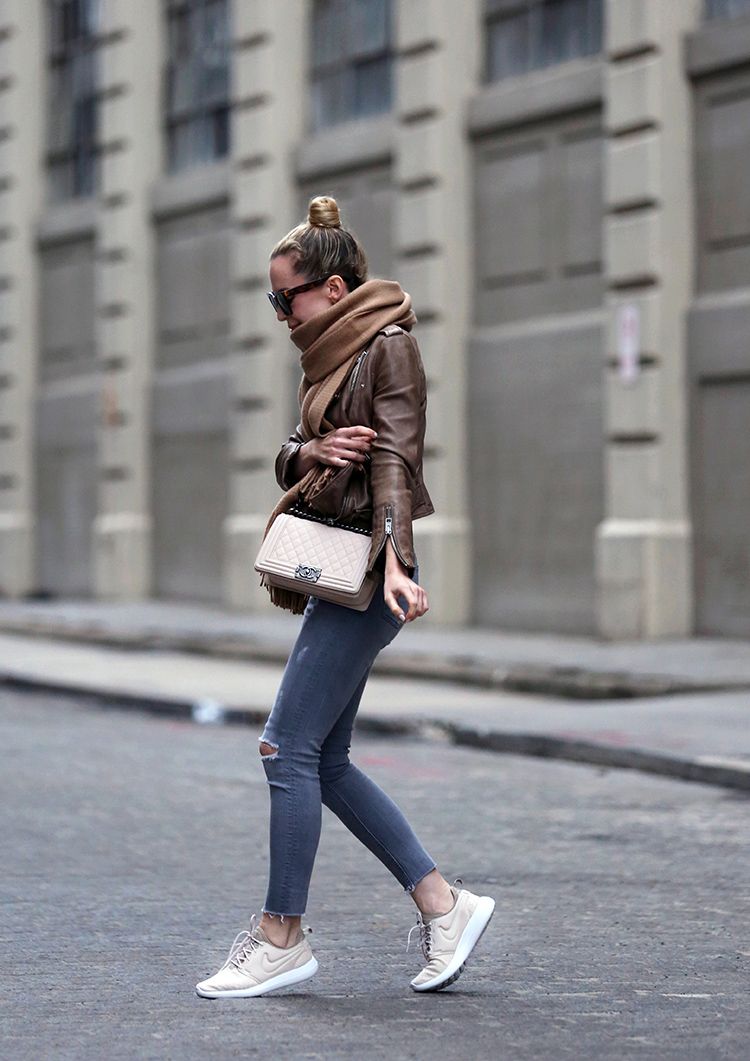 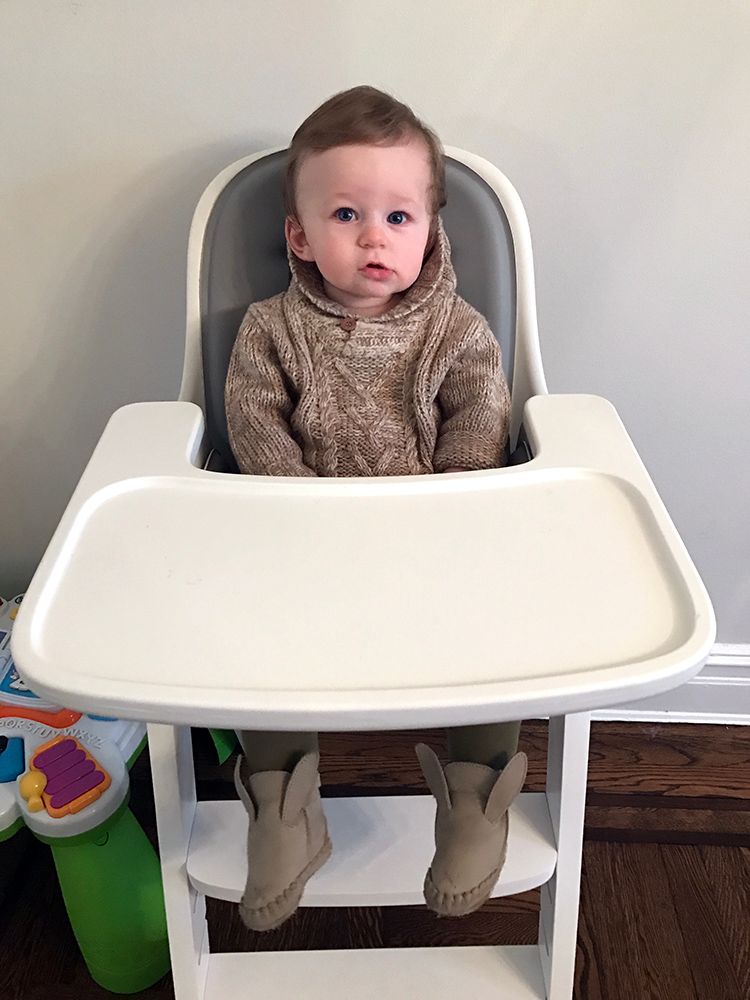 Leather Jacket: All Saints | Camel Scarf | Denim: Topshop | Sneakers | Sunglasses: Celine
So much has changed since my last Nate update! Firstly, I cannot believe I’m already started to (mostly) plan his first birthday! So many people keep telling me "but he won’t remember a thing!" and I’m like "Um… this party is for US!" Of course I’m aware that he won’t remember a thing, but if there’s any reason to celebrate, it’s definitely getting through the first year of parenthood, am I right?!
So many highs, so many lows and so many reasons to get together with the people we love the most. Plus, pictures! I want great pictures for our (and his) future memory. I still kind of regret not doing some sort of newborn shoot, aside from the 9458490 photos I took with my iPhone.
One thing that sticks out in my head is everyone telling me "things get significantly easier after they turn a year." Actually, one of the best pieces of advice I received was that it gets easier at three weeks, six weeks, three months, and six months. And from there, easier and easier, although I’m assuming this excludes toddlerhood(?!) For us, that has been so spot on. Right now at 10 months, I kind of feel like I’m hanging out with a friend rather than a fragile little baby. It’s crazy, but he actually gets me. He has started to mimick sounds I make or little things I do and I’ve had to remind both Keith and myself to curb the potty mouth. That part is harder than I thought! I also realized that I curse way more than I care to admit.
In the past six weeks, I’ve gone away for the first time since Nate was born. Twice! Once to go to LA for Keith’s awards and then this past weekend, I went on two night trip with Urban Decay. Prior to these trips, I’ve actually had to cancel and turn down so many opportunities because I just wasn’t ready to leave him. However, little by little, it’s gotten easier. I don’t think I’m ready for more than a few nights, but right now, I’m happy with just that.
Slowly, I feel like I’m getting closer and closer to a version of my old self. I’ve gotten better at trying to balance work/baby/personal life/fitness/etc… but, I have my good days and bad. I’ve learned to not put so much pressure on myself and to recognize that I’m doing a good job. Quite honestly, when I pictured my life with a baby five years ago, I envisioned nothing but a hot mess. I’m happy to report that while I have my hot mess days, overall, becoming a mother has balanced me out in the best possible way.
Now, enough on me! Time for Nate:
Eating: He’s eating most of the things we’re eating. He loves scrambled eggs, oatmeal with banana and cinnamon, pancakes, avocados, sweet potatoes, couscous, PB&J, butternut squash, chicken and lately I’ve been making him a baby version of my smoothies. Today he had a smoothie with banana, berries and baby spinach.
Sleeping: He’s still sleeping through the night and napping two times a day. He usually naps for one hour in the morning and 1-2 hours in the afternoon. You can check out my sleeping post here.
Saying: Mama, dada and hi.
Teeth: Six! Four on the top and two on the bottom.
Milestones: He’s fully crawling, pulling himself up an shifting himself from one place to another (while standing). I’m pretty sure he’s going to walk any day now, which I’m excited about and dreading at the same time.
In these photos, Nate is wearing:
Sweater: Nordstrom | Pants: GAP | Booties: Donsje |
The highchair is OXO