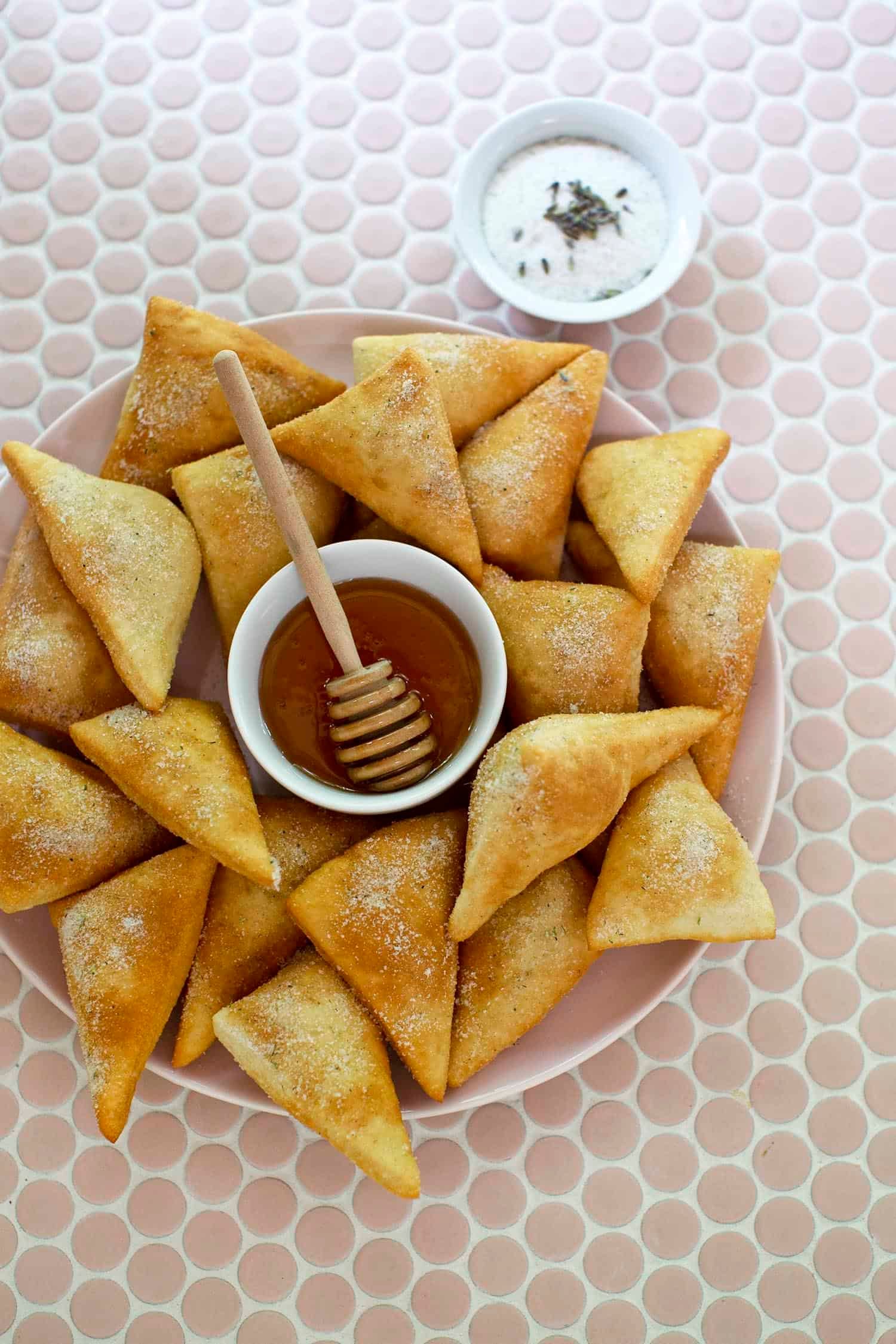 I was recently reminded how much I LOVE sopapillas. I went to St. Louis for a weekend trip with some friends of mine and one of the breakfast spots we stopped at served delicious southwestern food, including sopapillas (instead of biscuits) as a side. Everything was delicious but the sopapilla really stood out for me, because they are just too good!
If you have never tried a sopapilla before, you have been missing out, my friend! They are little triangles (or other shapes) of fried bread that puff up so when you tear them open you have these little air pockets you can then drizzle honey into. Simple, but insanely good. 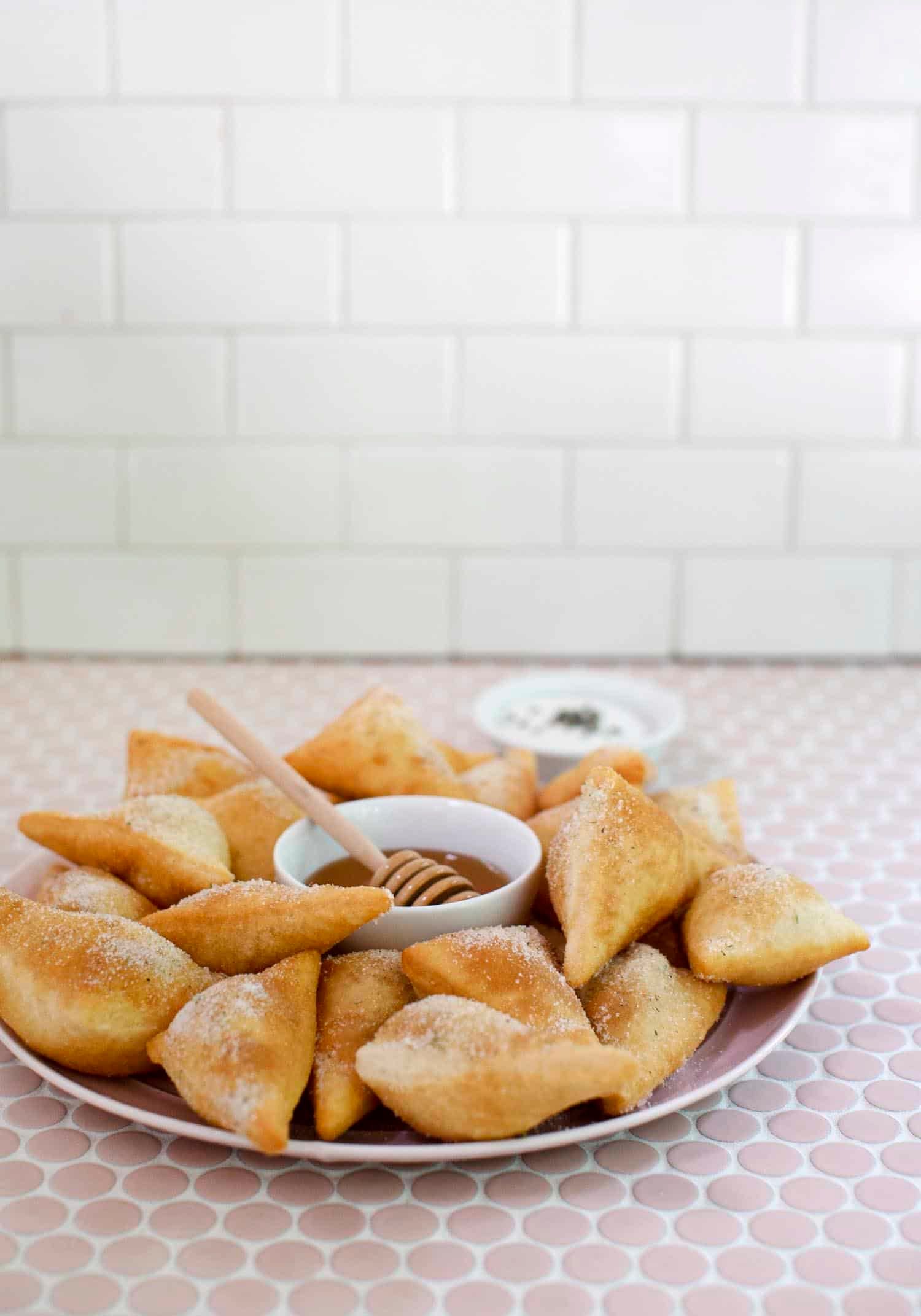 Normally, I don’t fry a lot of food at home, especially during the hot summer months in the Midwest where I live. But there is something very summertime about sopapillas to me. I think it’s because growing up we’d often visit my great-grandmother, Lulu, in the summers when we were all out of school. She lived in Oklahoma and we’d always stop to eat at a Casa Bonita either on our way there or on our way home. Being a kid with a sweet tooth (nothing has changed, clearly), I pretty much just ate sopapillas for my meal. Ha!
Even though these do involve frying, they are SUPER easy to make otherwise. If you’ve ever made homemade donuts before, these are similar, but I think a little easier. I also kind of like that these aren’t too easy to make, in that they do involve an hour of rise time and heating oil for frying. If they were too easy to throw together, I’d probably eat them way more often than anyone should be eating fried bread. 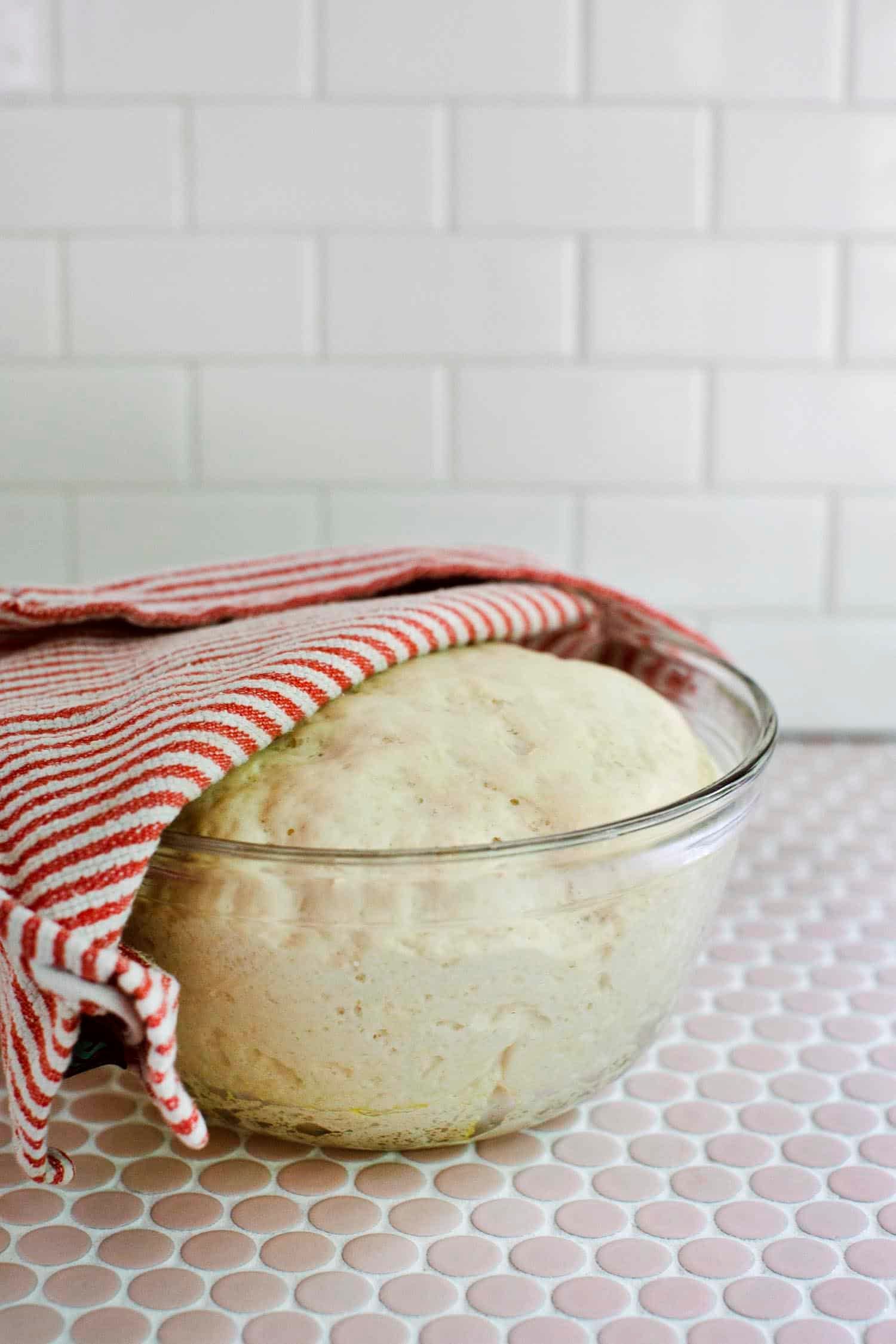 This recipe is just my classic sopapilla recipe that I shared a few years ago, but I’ve added a minor but fun twist. I’ll share that in a second. But I do want to point out that this recipe makes a LOT of sopapillas, so it’s a good one to make when you’re planning to have family or friends around. Don’t make these just for you—they are super addictive. You have been warned. 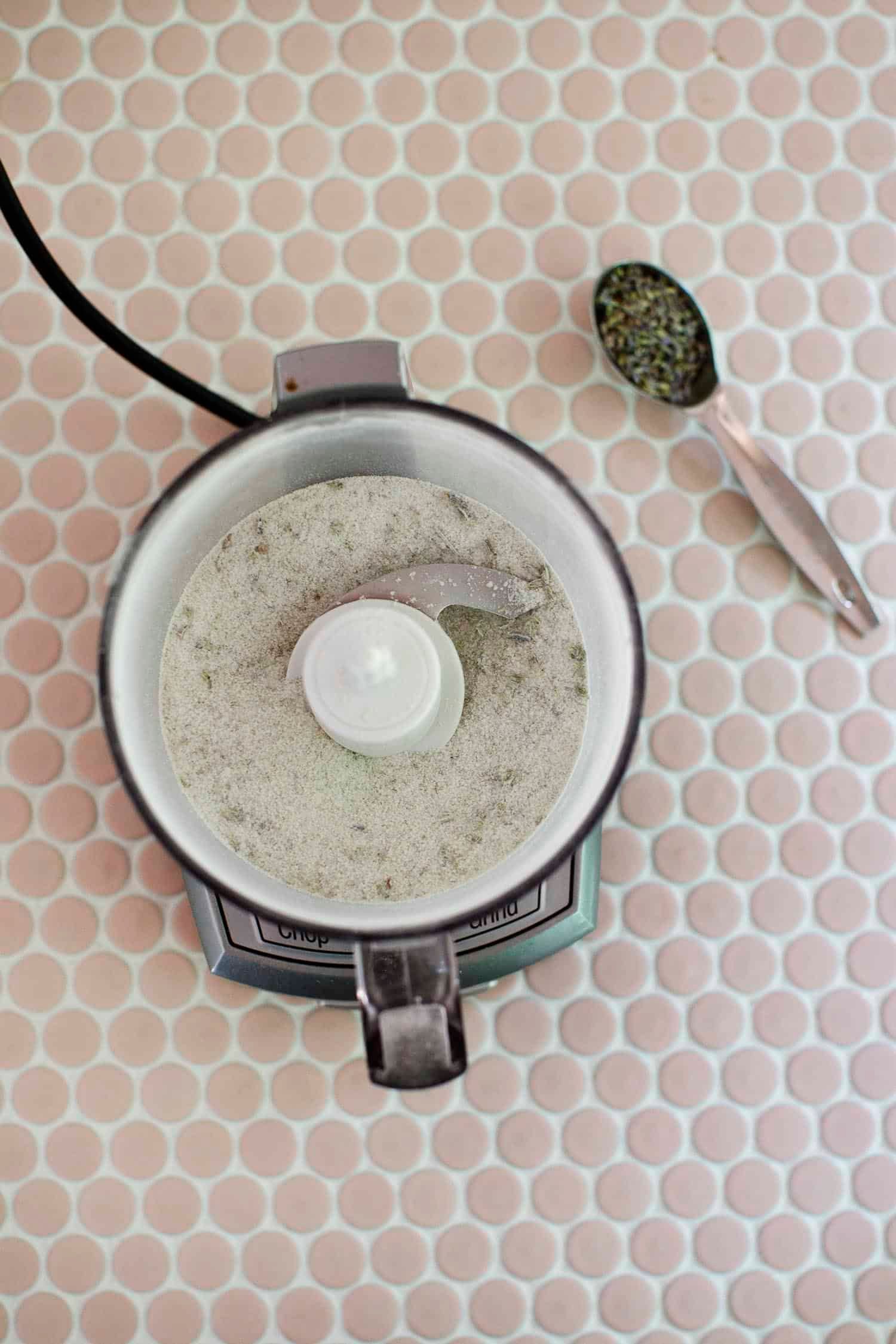 While my dough was rising, I made some lavender sugar for these to get dusted in. I normally add some cinnamon sugar to the outside but decided to change it up, and I loved this variation! Simply combine 1/2 cup granulated sugar and 1 tablespoon (food-grade, organic) dried lavender buds to a food processor. Pulse until the buds have been broken up, the sugar will begin to appear a soft purple or grey color. These smell AMAZING by the way. But I’m a pretty big lavender fan as it’s also a scent I like to diffuse in my home. 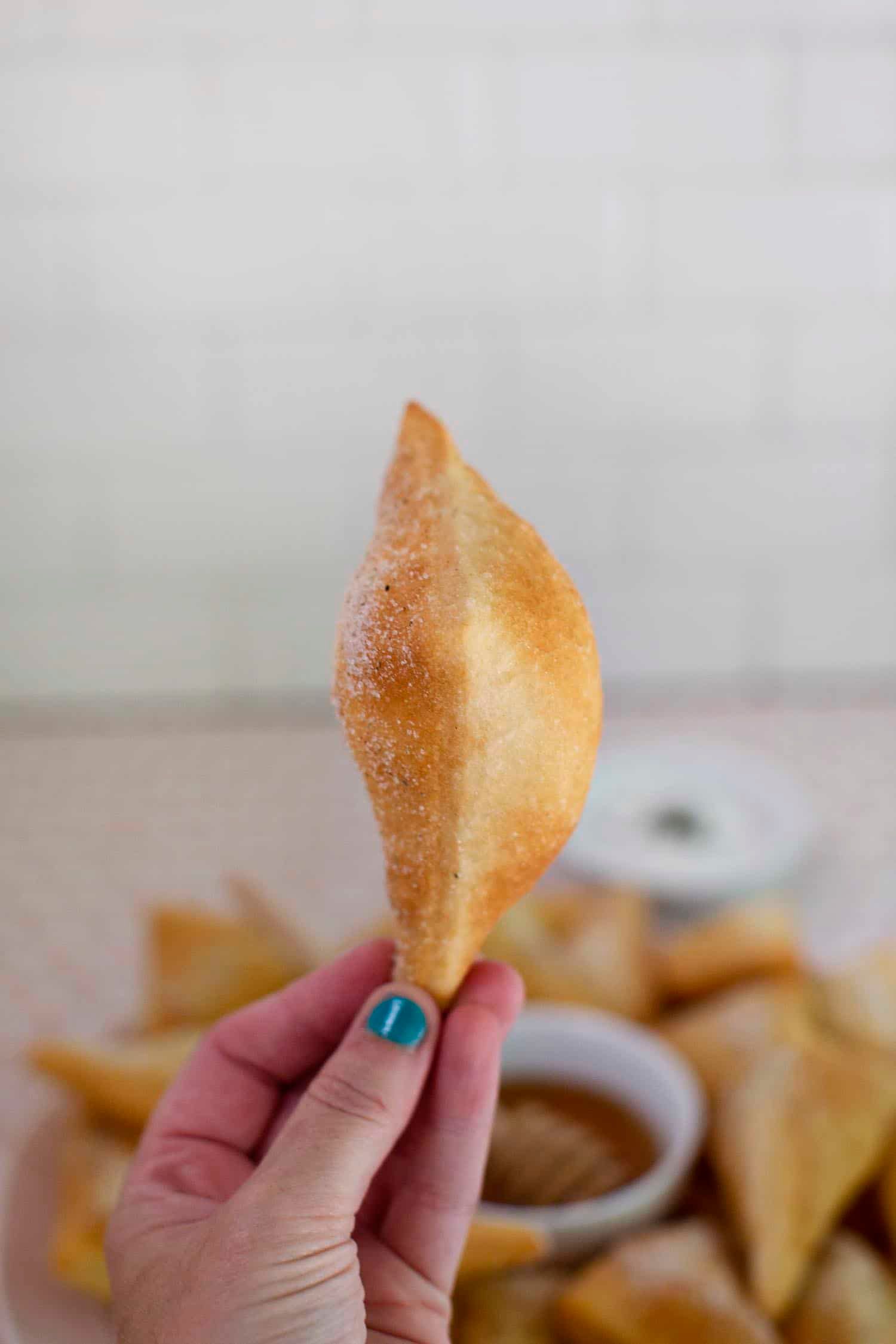 Ignore my crazy blue nails—I was needing some color this week. But here you can see how the sopapillas will puff up when fried. This is KEY as you’ve got to have that little air pocket for honey drizzling business. It’s a must for me.
These are super fun as part of brunch, being similar to donuts. I also made these one night when a bunch of friends came over to help me consume them. Ha! I think they would go well with margaritas, but I ended up not having enough limes that night. So plan better than me. I believe in you. xo. Emma