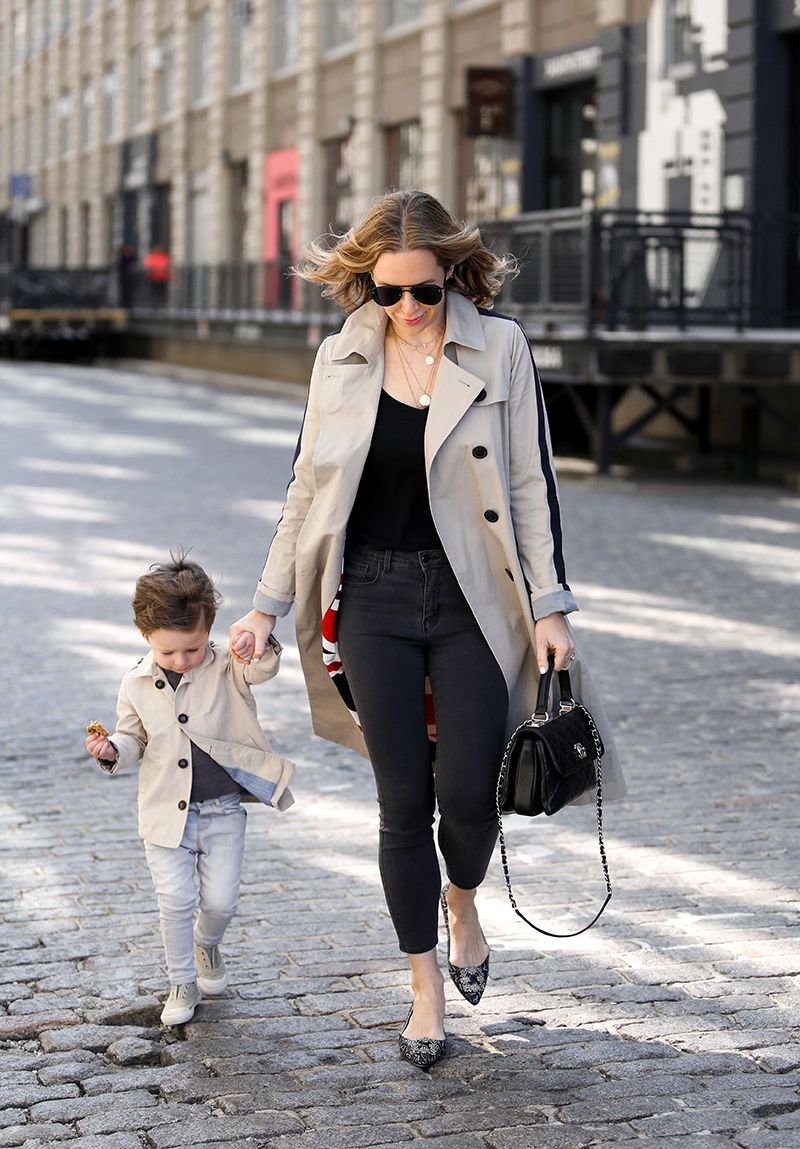 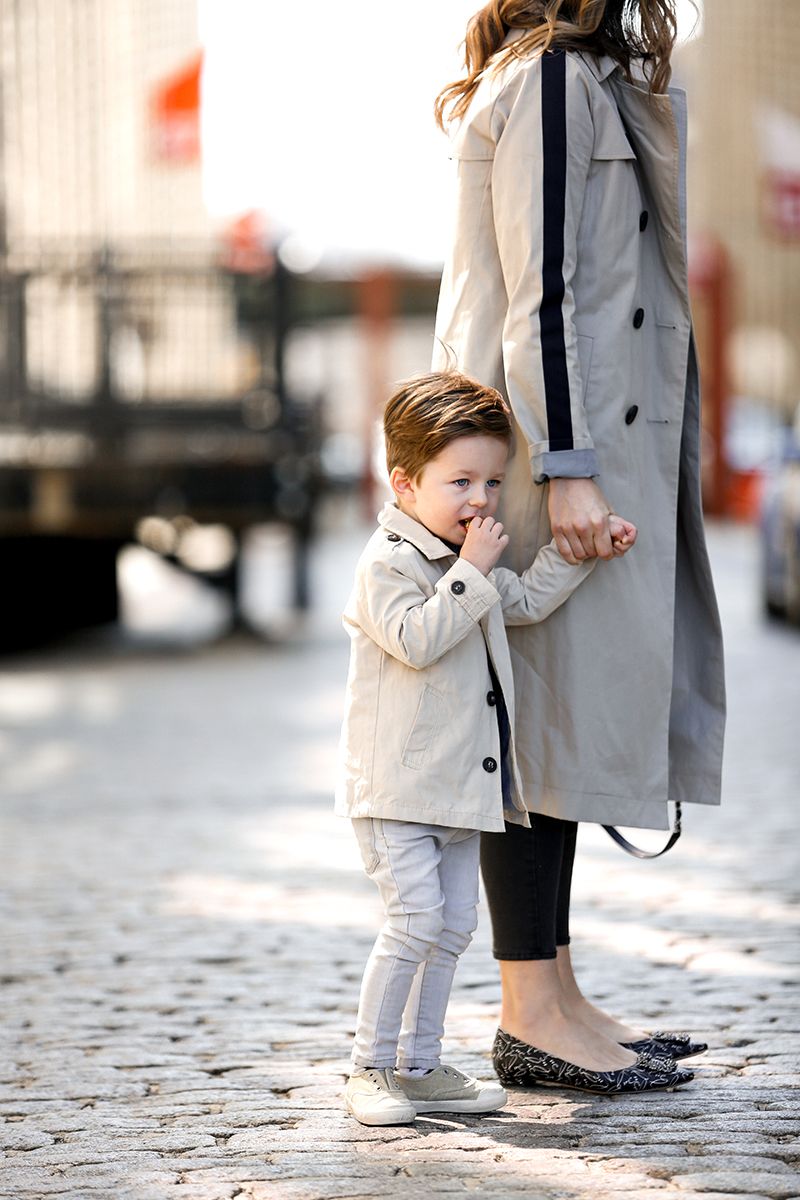 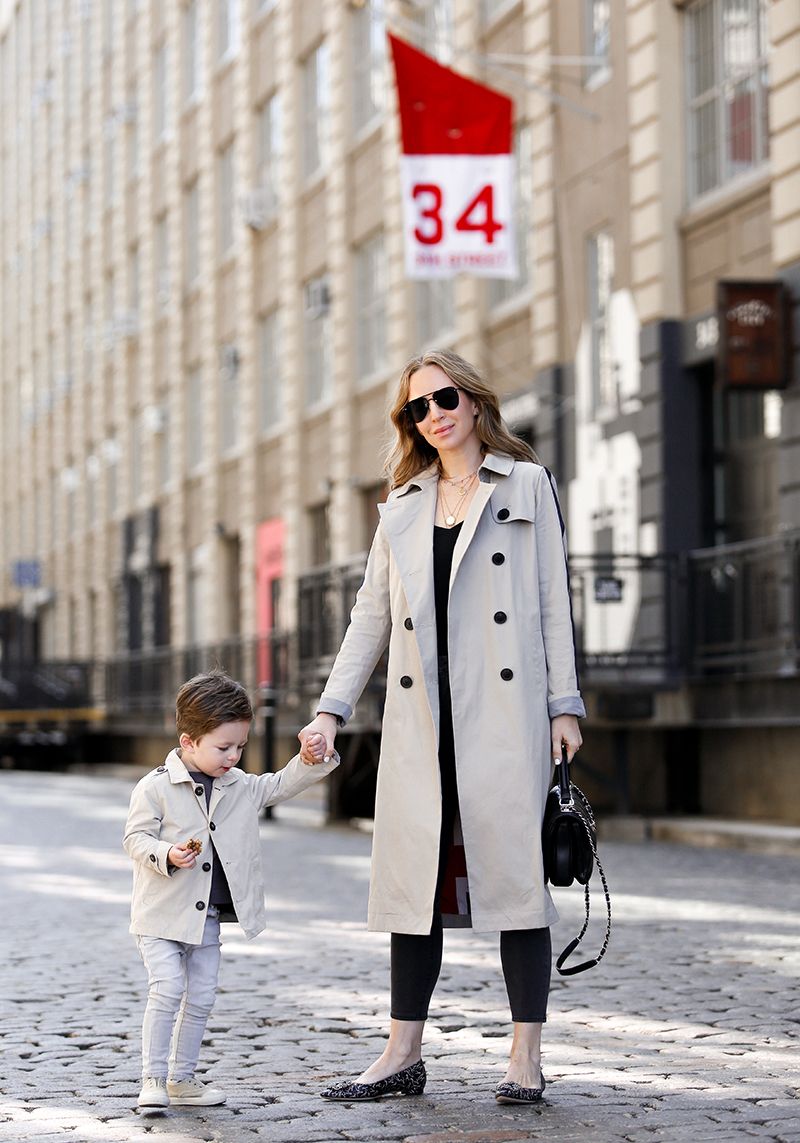 On me: Trench: Boden Clothing (wearing a size 4) | Tank: L’Agence | Denim: L’Agence | Flats: Manolo | Sunglasses: Le Specs | On Nate: Full outfit is from Zara. Trench is old, but a similar one here.
Before I dive into the two questions I get asked pretty often: "Is Nate potty trained?" and "Does Nate speak Russian?" I want to take a moment and mention how much I love trench coats on children. I mean, is it me or is it not the cutest thing in the world?
Before I had a child of my own, I remember seeing this photo of Emanuelle Alt and her daughter and saving it to my Pinterest board. I just loved both of their outfits so much. Then, a year later, I was in Paris and I was blown away at how many children were dressed. Rather than wearing "kiddie clothing," they were dressed like mini adults, often resembling a kids version of what I would want to wear myself. I could not get enough and thought it was the cutest thing I had ever seen. Obviously, there’s a time and a place for it.
On days Nate goes to school, he is in sweat pants and very casual clothing. I cannot be bothered with putting too much thought into it. He’s there to play and be messy and I’ll just throw anything on him. But on the days that we’re going somewhere or hanging out as a family, I love to have a little fun with it. I know it’s just a matter of time where he’ll have his own dressing opinions, so I’m just riding the wave as long as he lets me.

Now that I got that out of the way, let’s dive into two questions I get asked quite often:

Not fully, but we’re almost here. I’m a little embarrassed that it’s taken me so long to do it. Quite frankly, I’ve been procrastinating, too busy or just too tired to put the work in. The truth of the matter is, I know he’s been ready. He’s an intelligent boy who is very easy to communicate with, so I take full responsibility for waiting to the last minute. I mean, he’s going to be three in a month! This past weekend, we went without diapers 80% of the time, with the exception of our car ride to my mothers house. He did have one accident an hour after we got there, (we took the diaper off), but I know accidents are to be expected.
Initially, our plan was to dive head first into the "Oh Crap!" method, which worked for so many of friends, but we kind of did things differently to start. Instead, he started insisting that he wants to go without diapers, but refused to be naked (which is part of the Oh Crap! method). So, we put him in underwear and pants and he started telling us "I have to go potty," and he would! No accidents at home and he seemed to get it (almost) every single time. Today, he went to school with a diaper because I wasn’t 100% confident about where we were. This upcoming weekend, I’m going to try and convince him to be naked to follow the Oh Crap! method,  so we could drill it home and be done, once and for all.

Nate understands Russian fluently, but does not speak as well as he understands. He’s able to speak, but as long as the conversation is kept fairly basic.
From the time that Nate was 8 months old, we hired a nanny who only spoke to him in Russian. This was very important to me and it has 100% been the main reason he’s able to communicate in both languages! Then, there are my parents who also speak to him in Russian. As far as our home goes, it’s hard. When it’s three of us at home, we’re only speaking in English (Keith does not speak Russian).
When it’s just Nate and I, I try my hardest, but speaking in full blown Russian does not come easy for me. It requires so much effort on my part, something I don’t always have the mental energy for. As much as I grew up with it, since it’s not a language I practice regularly, my own Russian has gotten a lot worse. I’ve thought about enrolling him in some Russian speaking classes to keep the momentum going. Luckily, Brooklyn is a melting pot of so many cultures. So it’s just a matter of finding the time and the right situation for all of us.
So, that’s where we are! Like I said, he’s going to be three in less than a month, which simply blows my mind.