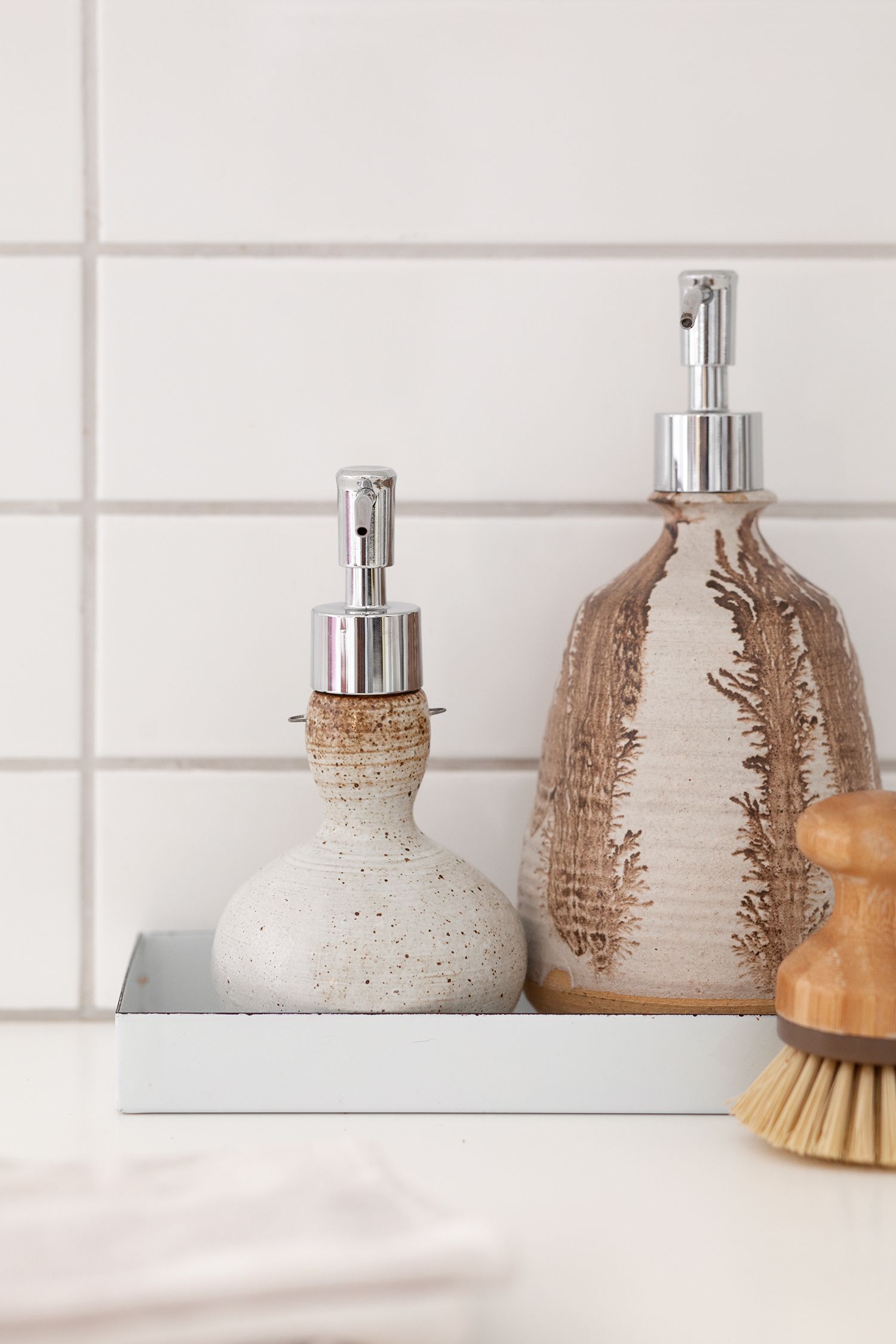 As an avid vase collector, I’ve been trying to think of interesting ways to repurpose some of my favorite small vases. When the bar soap in my powder room began to disappear, the answer came to me! I could transform my old vases into liquid soap dispensers!
I fiddled around a bit with different techniques to make the soap dispensers until I found a method that seemed to work best. If you’re not happy with the selection of soap dispensers available in stores, or simply have an overabundance of vases like I do, this is the perfect quick project for you! 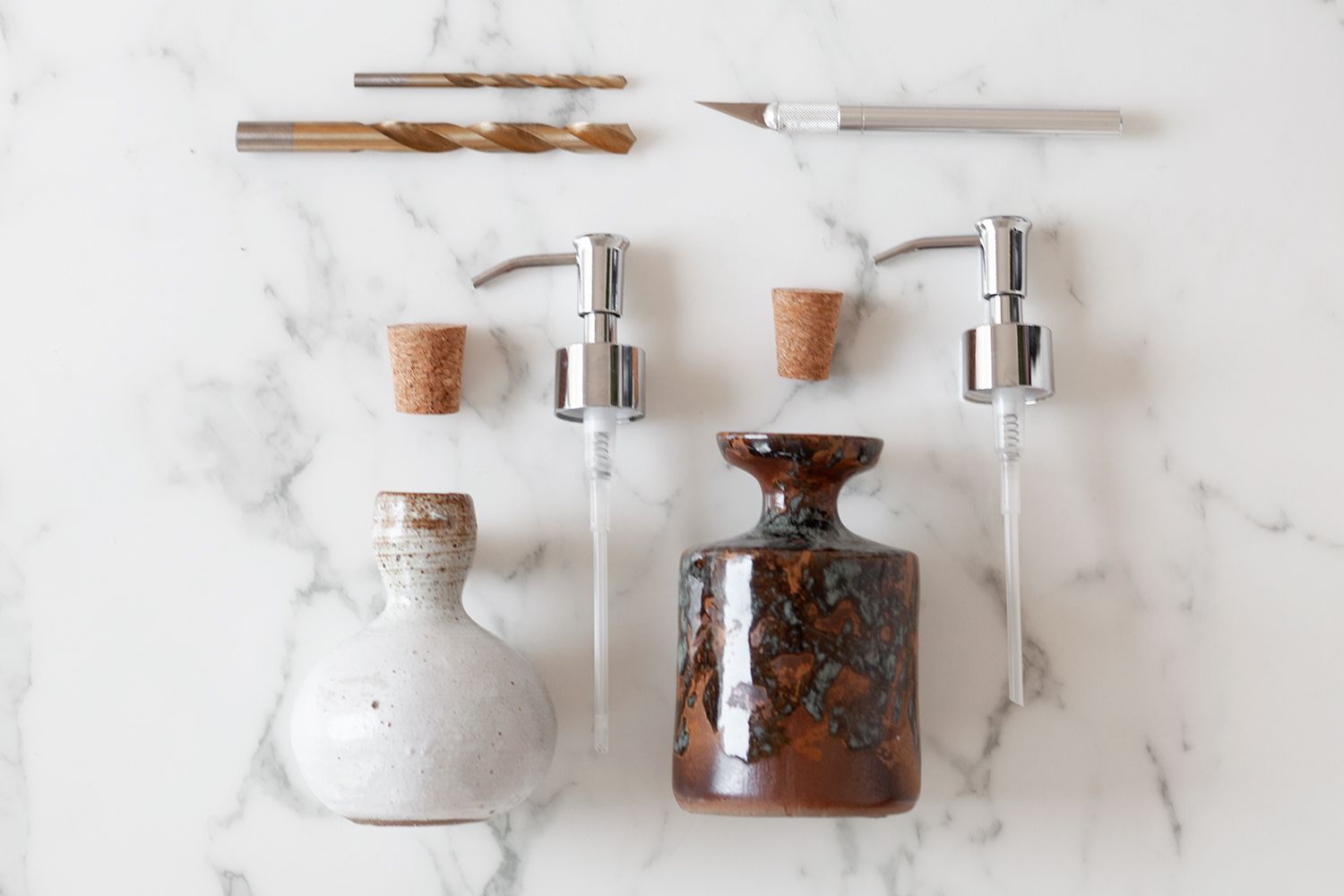 Supplies:
-Vase (such as a bud vase with an opening at least 3/4″ wide)
–Soap pumps (I reused ones from old pumps, but you can buy them too. Just be sure your vase opening is at least 1/4″ wider than the top of the soap pump.)
-Cork sized to fit snugly in your bottle opening (I bought this cork variety pack, but you can reuse old wine corks too!)
–Drill bits (I used a power drill, but you can easily hand drill into cork using just a bit)
–Sharp craft blade 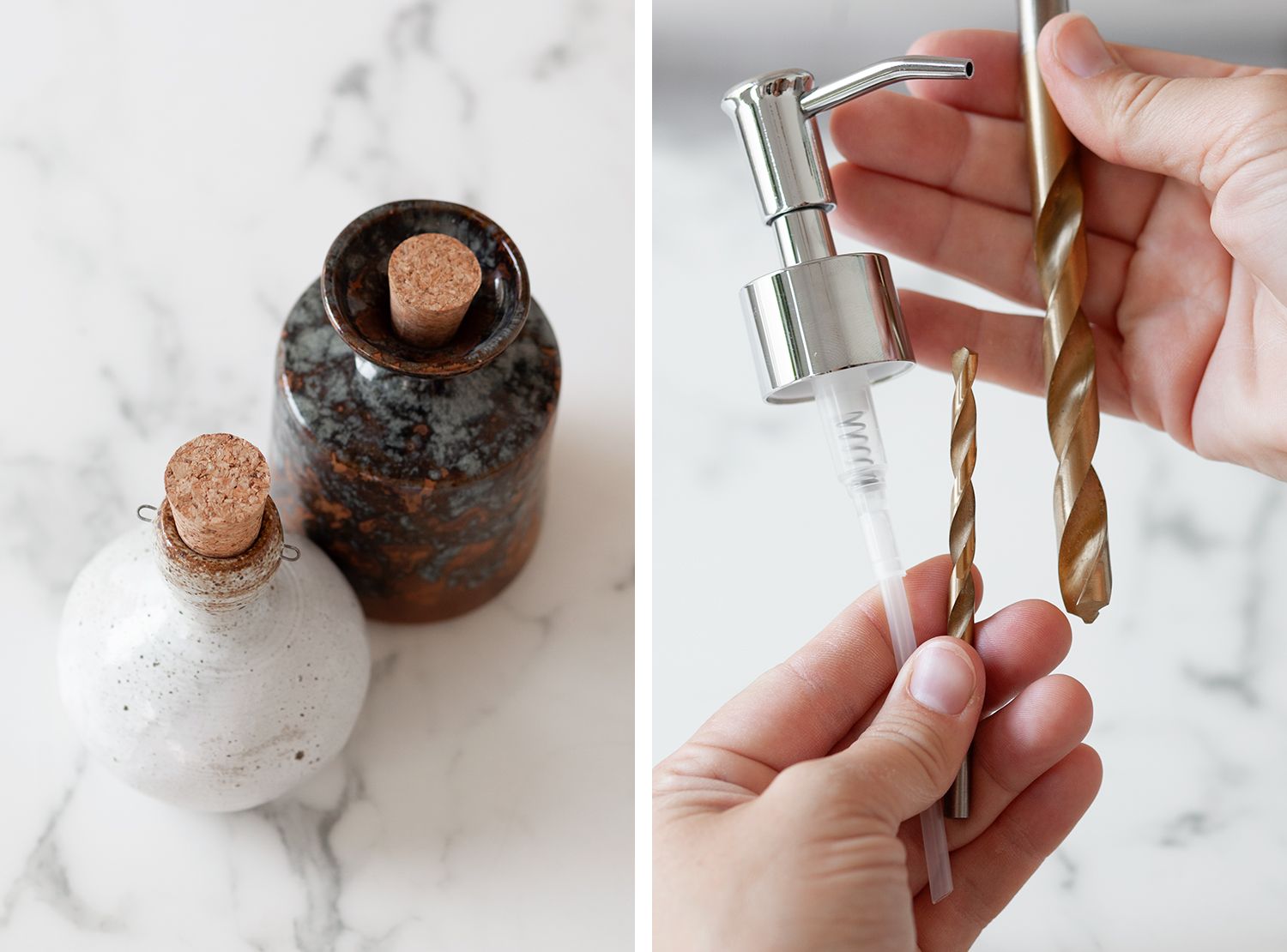 Step One: Find corks that fit snugly in the opening of your vase. The cork should stick up above the vase opening so it can fill the negative space at the top of your soap dispenser. Don’t worry if it sticks up too high—you can trim it down.
Step Two: Select drill bits that are just slightly smaller than your soap pump components. I chose one that is the size of the top of the pump nozzle, and one that is slightly smaller than the size of the tube. 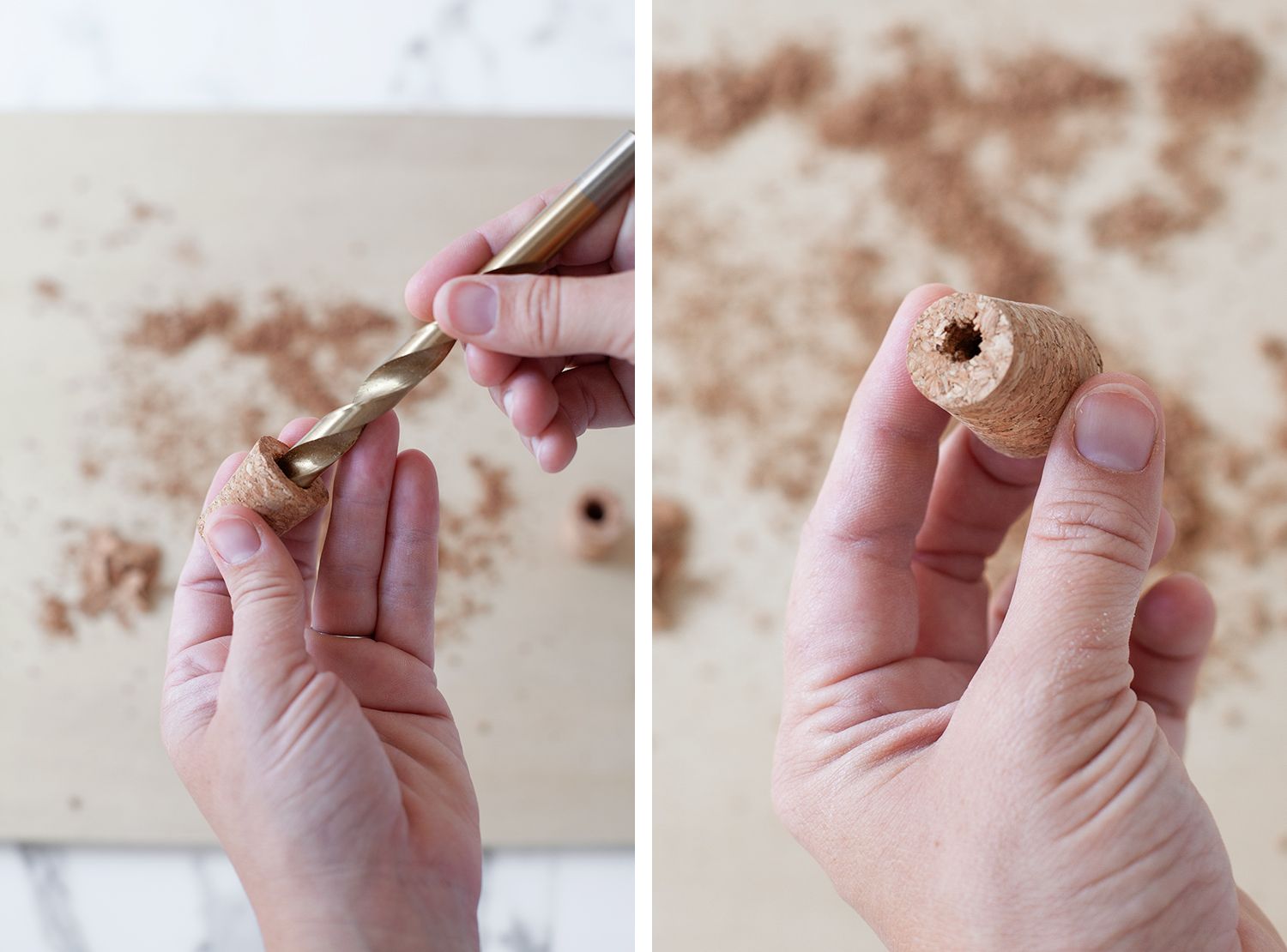 Step Three: Using the drill bits (and a power drill if you go slowly), make a wider hole on one side of the cork for the wide point of the soap pump. Then make a more narrow hole on the other end for the tube.
Obviously you’ll want to try to center the holes, but that can be super tricky! The most important hole is the larger one. If it’s not centered, your soap pump won’t be centered at the top of your vase. 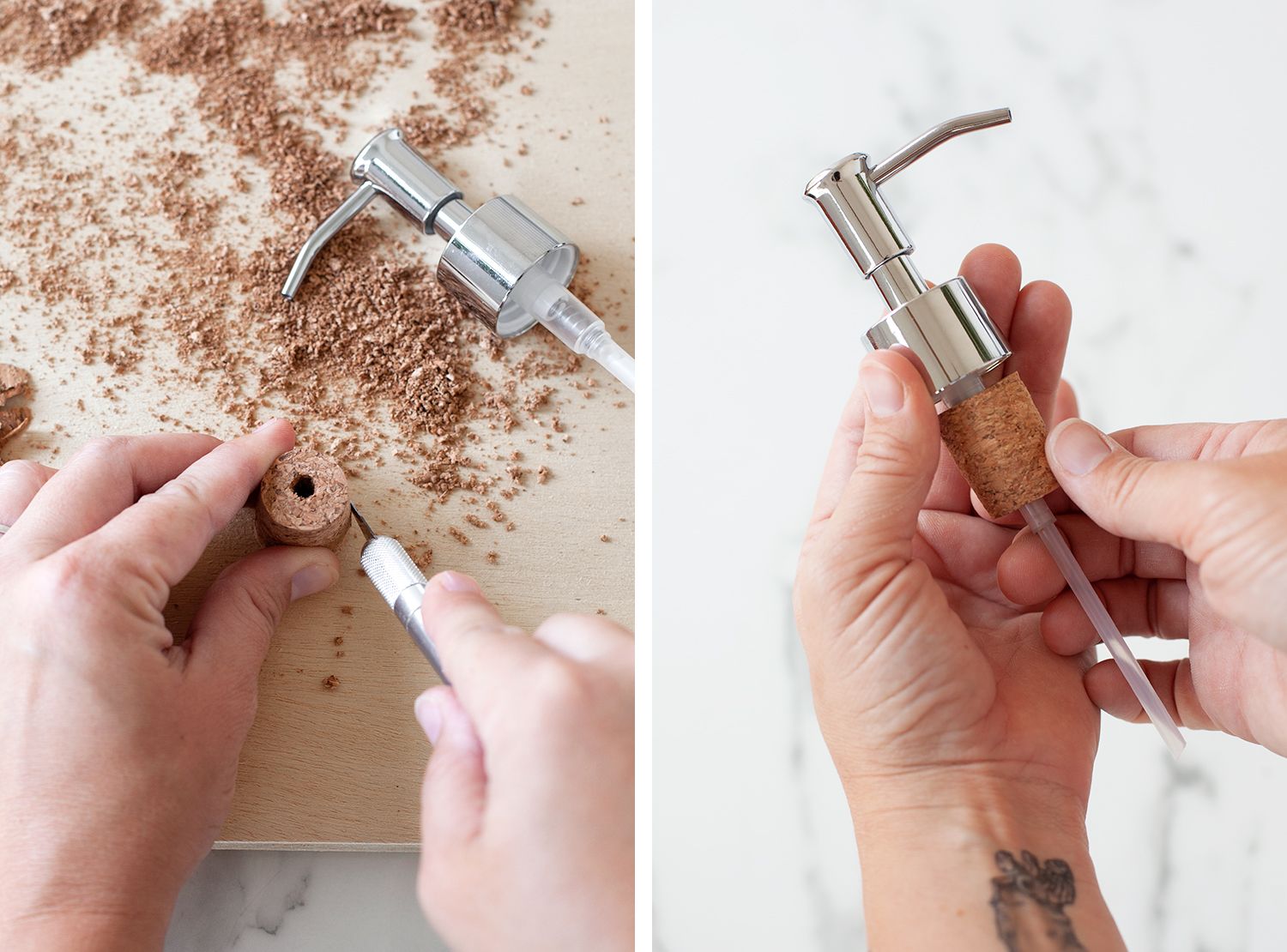 Step Four: If the top of your cork is too wide for the soap dispenser, shave down the sides using a sharp craft blade. Likewise, if the cork is too long, cut down its height as well. You want the cork to fit very snugly on the soap pump, but once you get it on, you probably won’t be able to pull it off to make any adjustments. So, now’s the time!
Step Five: Press the trimmed and drilled cork tightly onto the soap pump. This should be a very snug fit. When you pull the pump off the vase to refill it, you don’t want the cork staying in the vase. Instead, you want the cork to come off of the vase and stay on the pump. 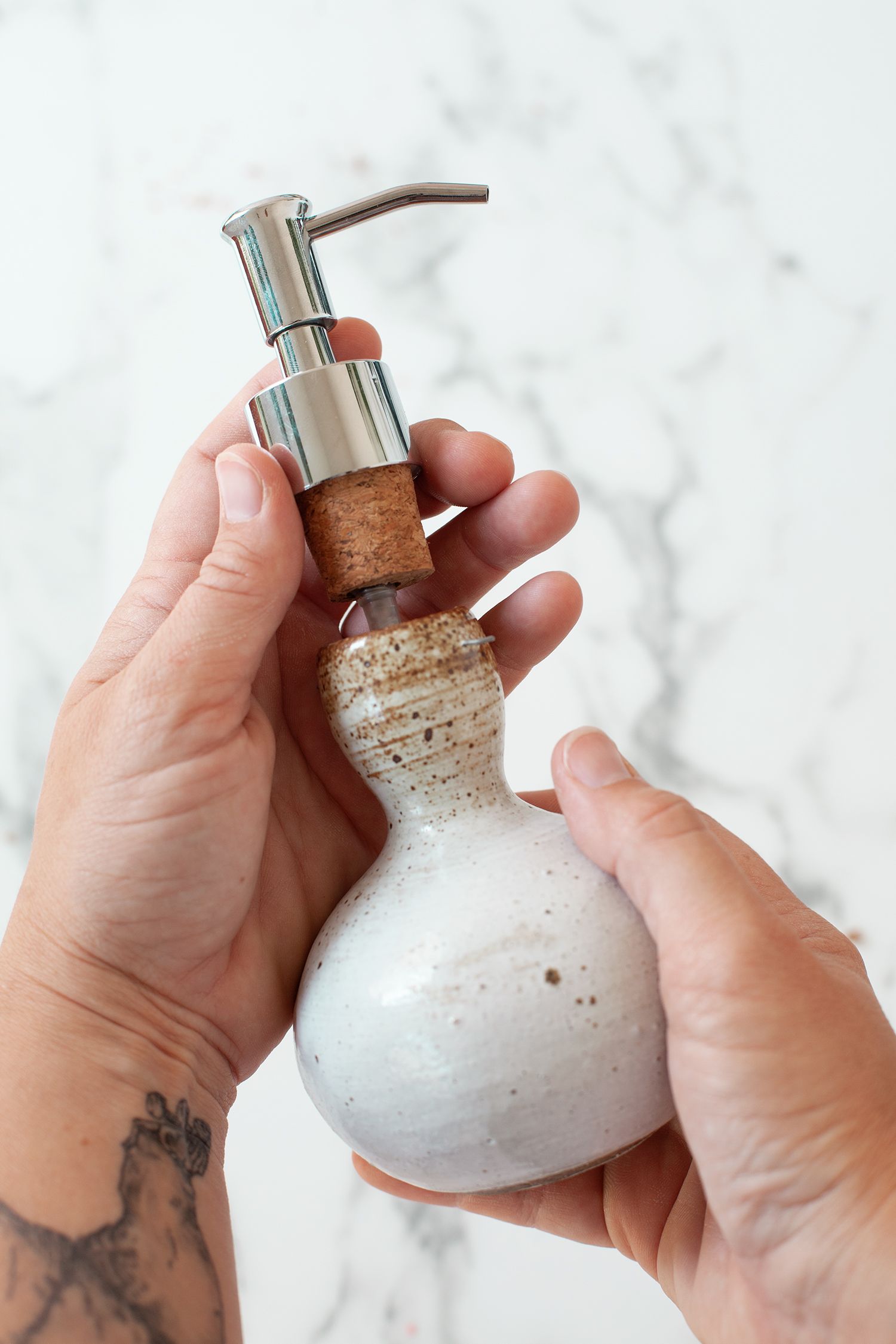 Step Six: Press the soap pump into your vase. This should be a snug fit, but still loose enough to be able to remove without struggling too much. If it feels too tight, shave down the edges a bit with a craft blade. 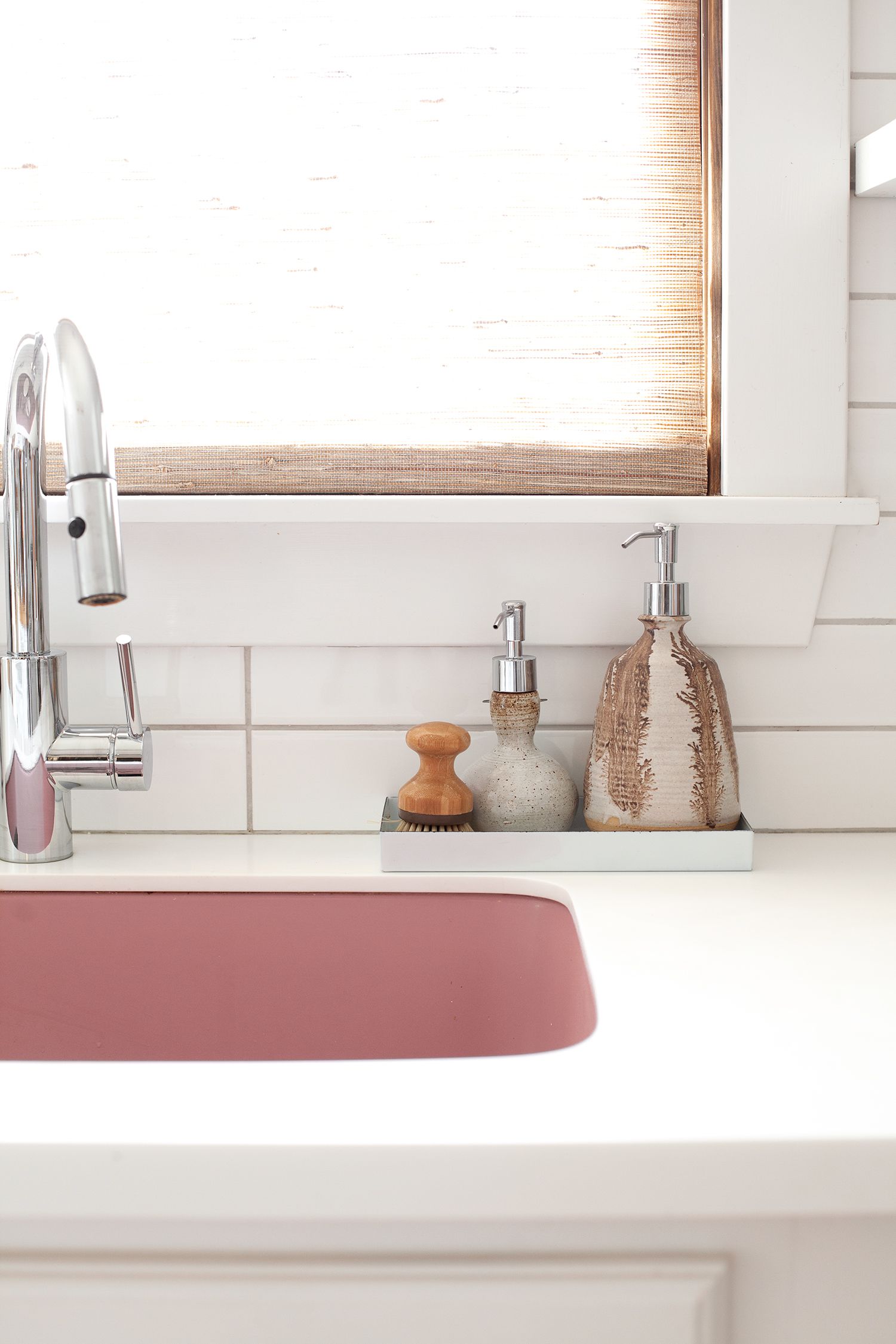 I love the look of the handmade pottery next to the sink in my kitchen! I think I’ll also make a vase for holding my liquid dish soap. I found these oil dispensers on Amazon that seem like a great fit for this project. So now I can make a hand soap dispenser and also make a dish soap dispenser! 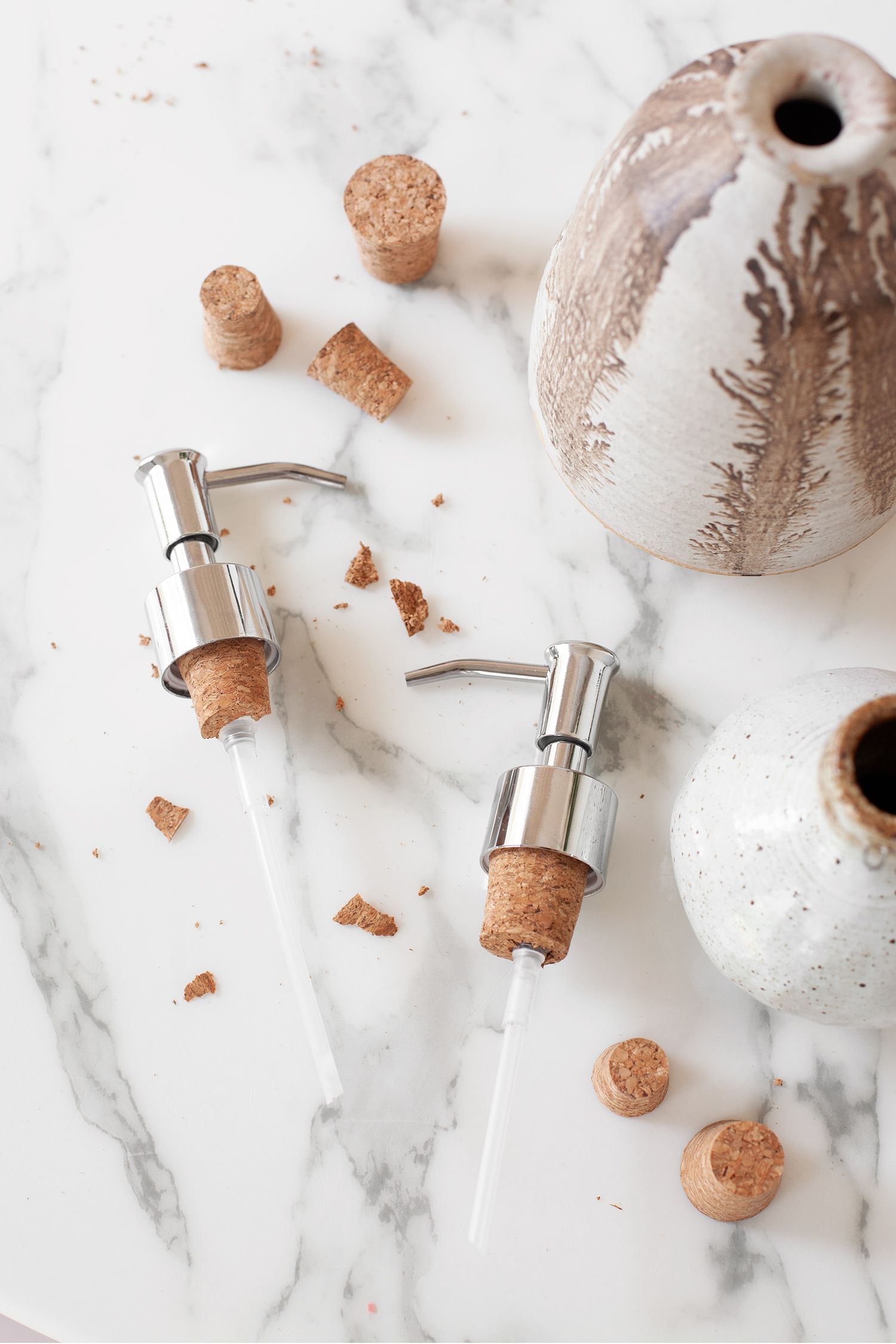 Tip: If your cork crumbles too much while drilling, you may need to go more slowly and carefully. Soaking your cork will make it less crumbly, but I drilled mine dry and it worked out just fine. 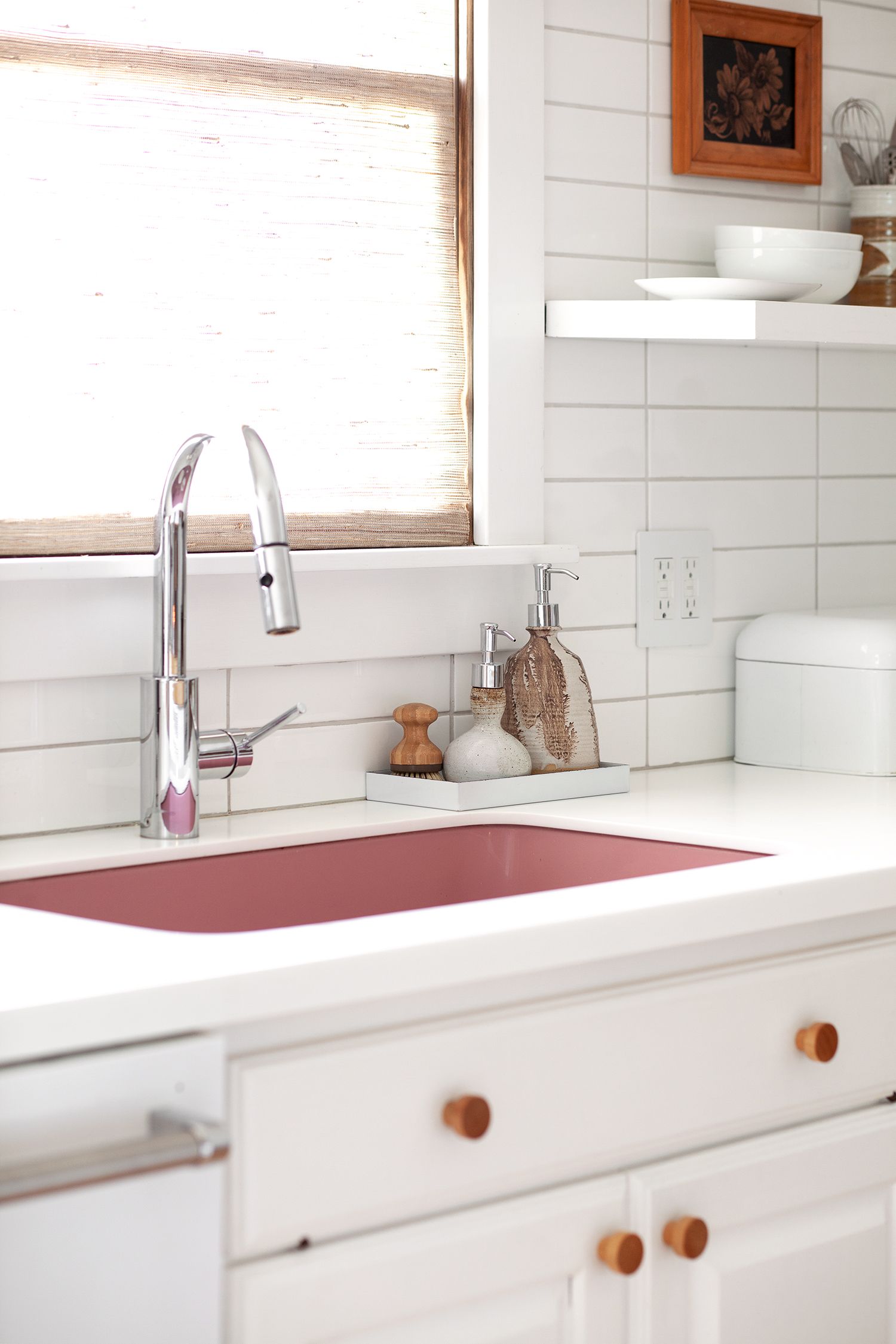 This was such a fun and easy project! If you buy a multi-pack of soap pumps and end up having extras, don’t waste the opportunity to make soap dispensers for gifts! I could see this being a nice idea for a housewarming gift or even accompanying a nice set of hand towels from a wedding registry. –Mandi