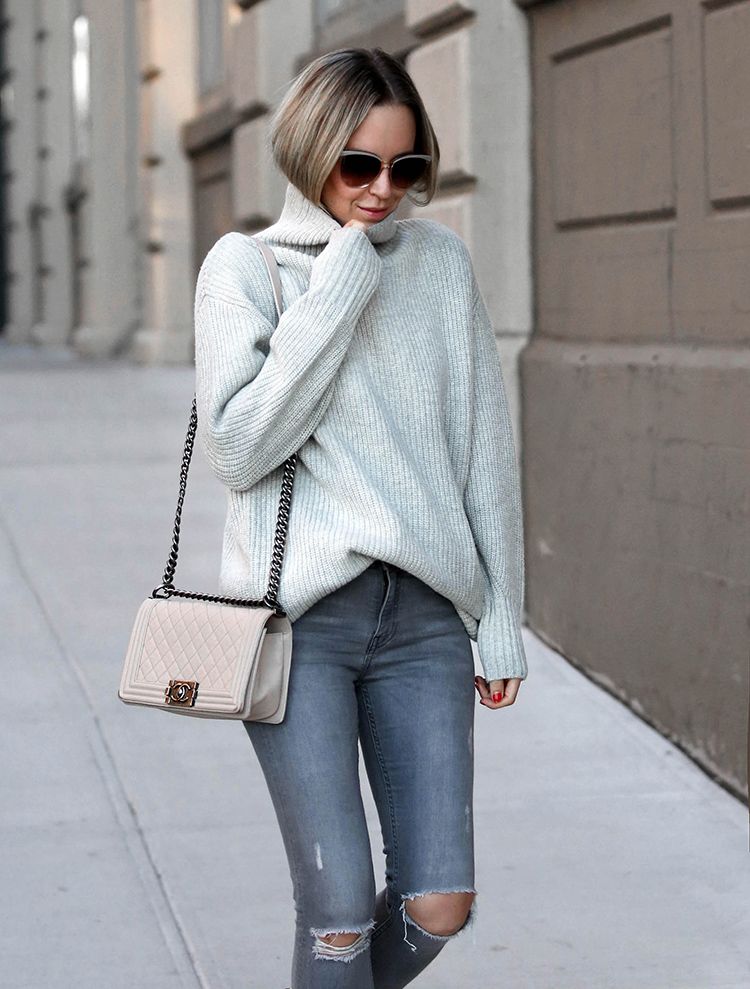 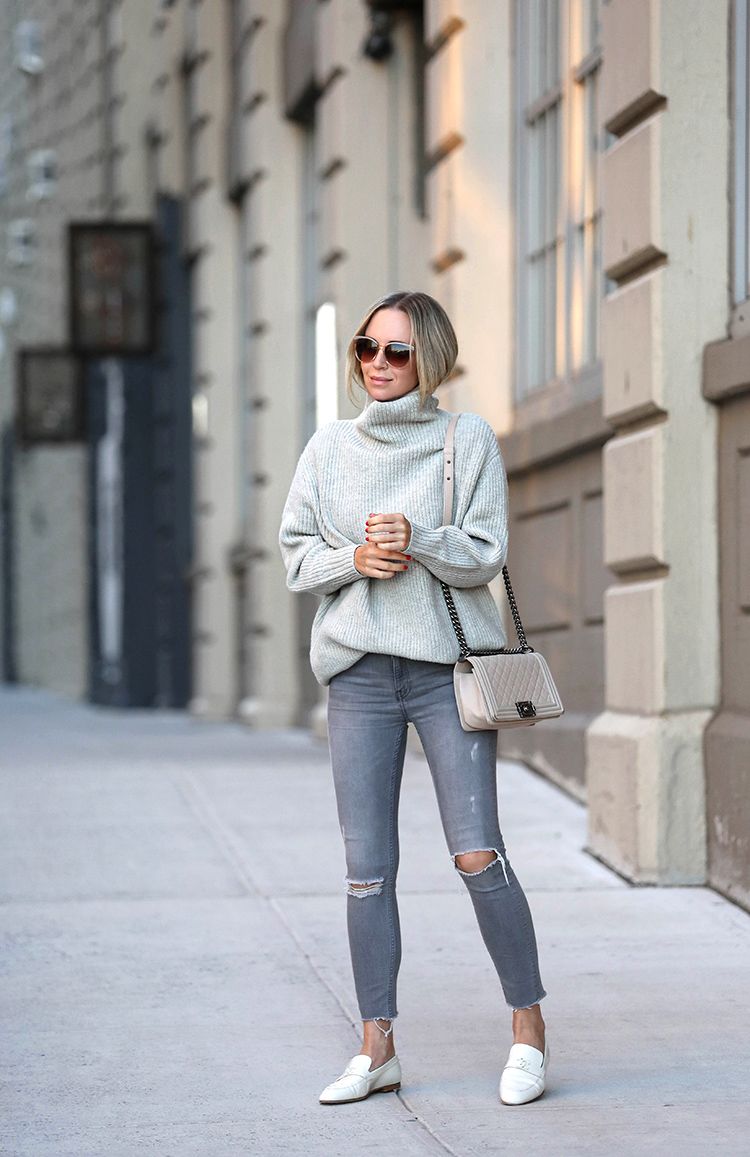 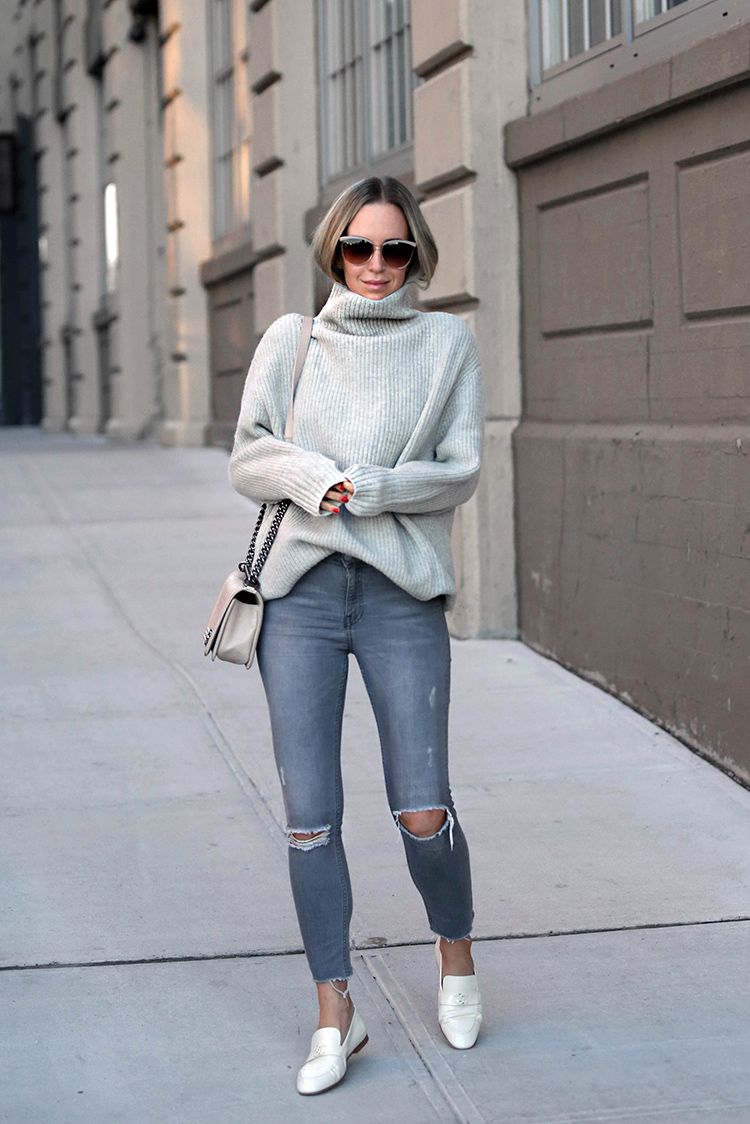 Sweater: H&M | Denim: Topshop | Flats: Chanel | Sunglasses: Chloe
We shot this outfit over two months ago and I realized, I never got around to posting it. Occasionally that happens and next thing you know, it’s 12 degrees outside and there’s 5 inches of frozen snow. Yesterday, we finally submerged for a breakfast outing, but aside from that, it was full hibernation mode. The good news: being cooped up at home, resulted in some of the most productive days I’ve had all year.
There have been so many things on my looming to-do list, but as it always goes, I kept putting it off until "next week" or when "I’m less tired." One week turned into a month which turned into a year and the cycle continued. The crazy thing is that mentally, it was clogging my head-space. It’s amazing how a clean home,  a home free of clutter, or a closet full of things that you actually want to wear, actually contribute in setting the tone for the day. I was sick of walking into my closet, or opening up my nightstand drawer and getting frazzled. When we first moved into our home, my closet was my happy place. It was clean, organized and it was one of my favorite ways to start the day. Overtime, it turned into such a cluttered  sh*t show (along with other parts of our home) that I couldn’t stand it any longer.
After listening to several inspiring podcasts that touched on the topics of actual things, decluttering and how it’s okay to let go, it left me inspired and made the process significantly easier. These are the rules I went by (and we’re still in the middle of it):
*If it’s something I haven’t worn, used, touched in over a year, it went into the donate or trash pile. So many of us keep things because of "one day." One day we will wear that dress, one day we will use those plates, one day we will watch those DVDs again, but the reality is, how often does "one day" turn into one month? Into one year?  And in my case, several years. The guys from The Minimalists podcast often say that "one day" is our worst enemy. So I went on a rampage and if something held zero sentimental value, it went into pile. I even got Keith involved and several hours later, we had 15 garbage bags. We let go of the guilt often associated with purging and it actually felt really empowering.
*I went by the same method when tackling the drawers in our house. I started with my nightstand drawer which essentially turned into my junk drawer. I took everything out, placed the contents on my bed and put back only the things I use every single night. Now, I actually have a nightstand that is clean, organized and brings me an odd level of satisfaction. The crazy thing is that I don’t even remember what else was in there or what I threw out. Just a bunch of unnecessary crap!
*I did the same with our cabinets. If there were spices or canned good that haven’t been touched in ages, it got tossed.
So while we’re still in the middle of this process, mentally, I feel lighter and inspired to tackle one section at a time. This is something I really wanted to share as I can imagine that so many of you are in the same boat. If you are, I hope this post will inspire you to start doing the same. I promise you, it’s the best feeling.